4-year story in the making will come to fruition as the City of Glenn Heights celebrates its 50th Anniversary on September 16th, 2019, by breaking ground for two of the largest projects that will happen in the city's 50-year history; the building of the new City Center Municipal facilities and a new Senior Center both located on Hampton Rd.

"Grow with Glenn Heights" is the motto that the City staff has operated under for the past year since Hall has guided the helm of the City. "These projects are two of the largest undertakings the City has ever experienced and will usher in a new era of growth and development for the next 50 years of our great City," says City Manager David Hall.

The new Senior Center will be located at 1932 S. Hampton Rd. and will serve as a primary meeting, education and social space servicing Senior residents, aged 55 and up. The Office of Community Engagement will issue a community survey in September to gauge programming interest from community members and persons who will partake in the services offered through the facility. This building is expected to be completed in 120 days.

The City Center Municipal facilities, located at 1942 S. Hampton Rd., will be a new home for City Hall, Public Safety facilities and a Recreation Center. Housed in the land adjacent to the current City Hall/Fire and Council Chambers building, the new municipal complex will feature meeting rooms for residents, larger communal spaces for utility billing and court payments, a new, state-of-the-art Council Chambers and much needed additional office space for City employees. "We are looking forward to the new facilities because they will allow City staff to provide additional services, conduct more educational sessions and provide facilities that will foster communal gathering between neighbors and residents," shares Mayor Harry Garrett. These facilities are expected to open in a year and a half.

Groundbreakings for both facilities will occur on September 16, 2019, at 6:00 p.m. This date is also the City of Glenn Heights 50th Anniversary. The anniversary will be recognized during the event and will be celebrated with a small reception immediately following the turning of the dirt. 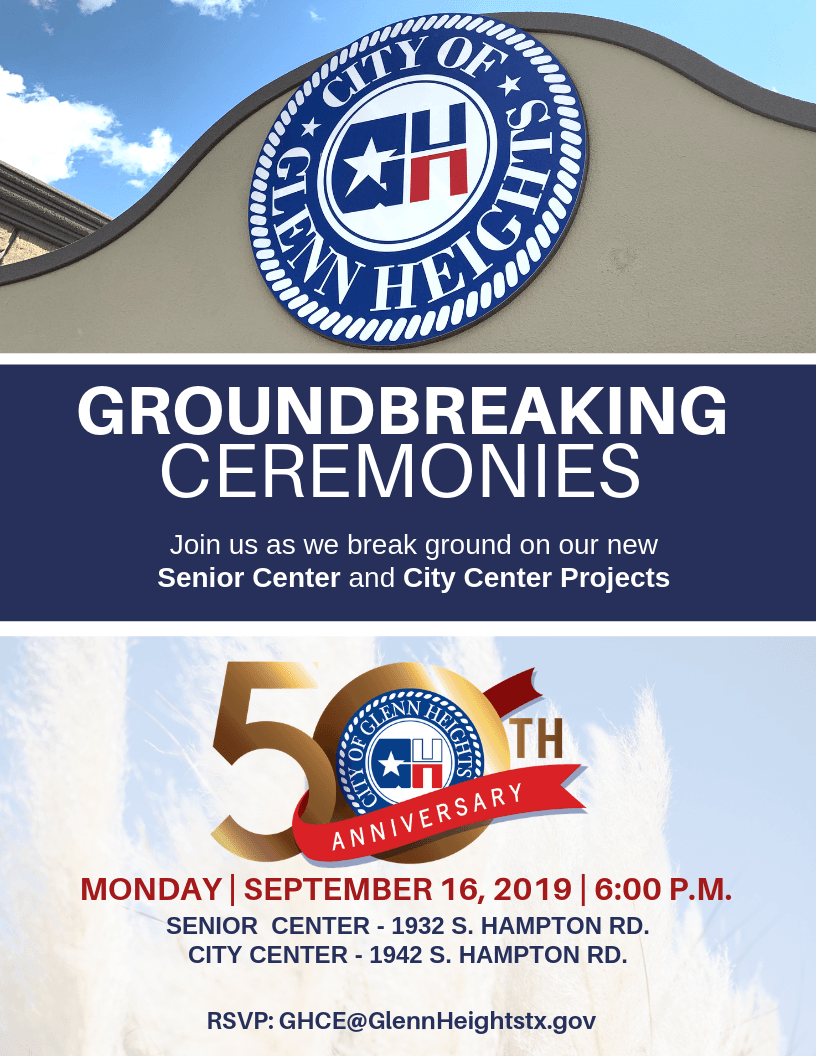